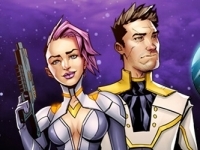 80%
Instructions
How to Play?

Alpha sector is under invasion. Young pilot, your task is simple. Warp into the sector, and destroy enemy spacecraft before they destroy you. Avoid the asteroids and keep your shields high. Rake up as many hits as you can! Features: - Interactive tutorial - Simple controls (keyboard on desktop, touch controls on mobile) - Endless gameplay - Fans of sci-fi movies such as Star Wars, Star Trek, Battlestar Galactica and Guardians of the Galaxy will love this game. Alpha Space Invasion is a terrific game which you can play for free in in friv99.com. With Alpha Space Invasion game, we supply many cool Friv 99 games to play at no cost.

Use Arrow Left And Arrow Right button to Move, Use Spacebar button to Shoot,