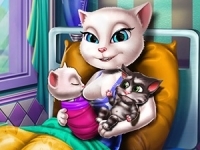 86%
Instructions
How to Play?

Talking Angela is so excited to be a mommy! She is about to deliver two beautiful kittens so call 911 and make sure everything is ok while waiting for the ambulance. Once Angela and the little ones are at the hospital, learn how to take care of them. Don't forget to change their diapers before feedi Play Angela Twins Birth online at friv99.com. You can play it in fullscreen to have fun with it. Angela Twins Birth is a great Friv 99 game to play with no cost.