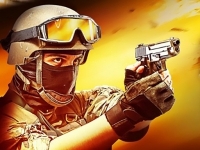 81%
Instructions
How to Play?

Bullet Party, The New Counter Strike Online Game, It is a io game that you play battle vs real players, many guns are available, choose your best and start the battlefield. You need to be carefull from hidden enemies that will try to shoot you, show them you skills, and try to be speed as you can! Bullet Party 2 is a terrific game which you can play for free in in friv99.com. With Bullet Party 2 game, we supply many cool Friv 99 games to play at no cost.