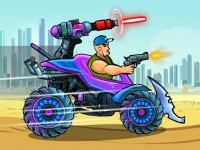 Ride, shoot, jump and smash your way to victory in this addictive runner. Team up with ex-Marine Bob to battle evil aliens who have invaded the planet. To make things even worse, they've kidnapped his beloved pet octopus. Needless to say that Bob is on a mission to make this an encounter that the aliens won't soon forget! Here you can play Mad Day 2 Special game and observe its walkthrough at no cost in friv99.com. Mad Day 2 Special is an wonderful game from our list of Friv 99 games.

Use Spacebar button to Jump, Use X And Arrow Up button to Rockets,