Drag to aim/Release to shoot 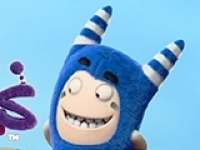 Fancy a soccer game with your favourite Oddbods? Kick the ball into the goal, but beware! The mischievous Oddbods are here to stop you. Features: - Compete against Oddbods such as Fuse, Bubbles, Pogo, Zee, Slick, Jeff and Newt. - Fun Oddbods theme song - Over 60 levels more more to be added soon - Interactive tutorial Fans of soccer or football will love this game. If you're into the World Cup, English Premier League or UEFA Champions League, this game will be interesting too. Play Oddbods Soccer Challenge online at friv99.com. You can play it in fullscreen to have fun with it. Oddbods Soccer Challenge is a great Friv 99 game to play with no cost.

Use Left Mouse button to Drag to aim/Release to shoot,