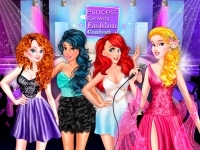 90%
Instructions
How to Play?

Ariel, Jasmine and Merida are three participants of the modern runway fashion contest. Each of them wants to become a Fashion Queen and get the first prize. First of all, each princess should prepare several stunning dresses for the others. The next step is the performance itself, so it’s important Play Princess Runway Fashion Contest online at friv99.com. You can play it in fullscreen to have fun with it. Princess Runway Fashion Contest is a great Friv 99 game to play with no cost.